I spent the 4th of July with Merry at the get-together of The North Ridge (local chapter of the Star Wars fan club) as invited by Larry & Janice.  I caught some of the fireworks (as seen over the houses, at Cheektowaga Town Park) on my camera, but the timing delay and low battery made it almost impossible.  I also heard that sparklers are illegal — I always thought they were the only things that weren’t!

The first issue of Martial Talk Magazine was published this month by a friend and business associate of mine, Rob Hubbard.  It contained the first of a six-article series I wrote, called “The Reality of Chi.”  The next installment is almost done, and I intend on writing many more articles which will be eventually published as a book.

I’ve played a little Minesweeper lately and made some good records, including NINE SECONDS on easy.  My all time record for “Easy” used to be 11 or 12 seconds.  Not the Nobel Prize or anything, and nowhere near the world records, but I’ve always been proud of being at least relatively good at such things. 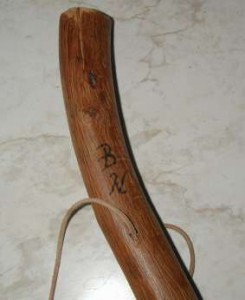 When I picked up Christina from her friend Brianna’s house out near Arcade, I offered to make walking sticks for them both.  Brianna took me up on it, but I couldn’t finish it sitting there, so I took it home.  The next day, it came out nice.

This weekend I was at Blockbuster Video (can you believe no one had “Keys of the Kingdom” with Gregory Peck available to rent?) and a young lady came up to me with a cell phone saying there was someone who wanted to talk to me.  I felt like I was in the Matrix, or on Candid Camera, so of course I felt right at home and took the call.  I found out the young lady and her friend were asking me if I could come back to Mount Mercy Academy (High School) to teach/demonstrate tai chi again.  The funny part is that just hours before, I came across the picture of these girls with me at the Erie County Fair last year — I didn’t even know I had it.  I love being a Teacher-Celebrity!

Gemma & Michelle, and various others who showed up ended up watching “O Brother, Where Art Thou” with Merry and I.  Christina was bored and stayed on the phone.

Christina and her friend Ashley are asleep after a sleepover last night.  Mer is working most of the week, so it’s me and Christina exploring the world on our own, except for the fact that there’s Fisher Park business to take care of here and there.  I hope that doesn’t rain on our parade.

She just got back from Camp Turner, and had a great time as usual, even under new management.  During the week, I made my own greeting card with Morris Pie (our orange cat she loves so much) on it — it came out really nice.  maybe another hare-brained scheme — downloading printable cards at $1 apiece?

I took a lot of pictures of the farm this Thursday, and maybe they’ll use some of them on their website.  I also got out to Dunkirk this Saturday to work with the Convoy Of Care people.  Took some nice pics by the water — the Margaret Ann was in dry-dock, and the Mary S II was in the water.

This last week wasn’t much of a vacation.  Christina and I had to stick around with a lot of window and carpet installations, etc., but we got to watch some movies at home and she had friends over a couple of times.  Her and Lizzy saw “The Exorcist” — I realize now that as a child I saw the “edited for television” version!  She said it was the scariest movie she ever saw.

Things are busy here at Fisher Park — everyone’s getting fire extinguishers, and there’s lots of repairs of all sizes recently.  There’s also concern about security, and a reward is now posted for any information leading to the arrest of anyone for vandalism or theft on the property.  I don’t think it will become an issue, just a precaution.