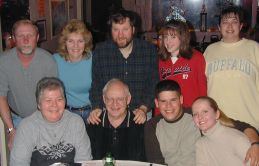 Last week Thursday, the closing went through, and the new landlord is now owner of Fisher Park Apartments (website no longer available).  I’ve got to meet with him again, and I am more and more confident things will work out for the best.

I also recently found out from my Aunt Bobbie that my Great Aunt Emily (my Mom’s Mom’s sister) died.  On one hand, I wanted to represent by branch of the family and be there out of respect, but on the other my wife felt it disrespectful or awkward to turn the funeral into a reunion with people I hadn’t seen in many years.  I really need to go over that part of my genealogy and meet some of these relatives, especially those nearby, and on a more pleasant occasion than a funeral.

Last weekend, I bribed Chrissie $5 to rake the leaves in front of two buildings, and she firmly believes it was not a fair wage.  I’m not really sure, but I know she doesn’t have any concept of money yet.  A couple of bucks seems like a lot to her most of the time, but then other times it’s “only” a couple of bucks.  When she gets a job someday …

Yesterday was election day (I voted but Merry didn’t feel well), and all the West Seneca schools were closed.  It was still no excuse for four 14-year-olds to do criminal mischief in the middle of the night.  I had my vending machine damaged in the process of attempted burglary, and some garbage was dumped on top of Merry’s car.  On a positive note, they were caught, one charged criminally (for now), and I got to watch a local detective take fingerprints (off the vending machine).  Now if only the PARENTS would spend an overnight in jail every time their kids were brought in — one officer said they’ve been know by the department for two years already.

On a bright note, today my Dad is visiting us, along with Kathy, and I believe Josh and his wife Melanie and their new baby.  A bit of tidying to do!

It’s down to 60 degrees F — in our apartment.  Merry considers that “room temperature.”  It really got cold, starting later in the day my Dad was here.  We finally met up Thursday at lunchtime at the Broadway Market.  I kidded Merry that he chose that place to reaffirm his belief there wasn’t much left in Buffalo.  I also got to see Josh and his wife (whom we never met) and she had a much more positive view of the area, having been brought up in a small town most of her life.  Kathy’s friend Karen came along, too, and we spent the day shopping mostly.  There are a lot of things you can’t buy outside of Buffalo, such as farmer’s cheese (for pirogies) and Salen’s hot dogs, which many people consider “the Best”, including my daughter, who will eat no other brand.

“Annie” was great — I never saw it before, and Chrissie was one of the orphans and townsfolk.  A little hard to see her, as she was in the background mostly, but I think I got some pictures.  That night (Saturday) I also got some pictures of the lunar eclipse (partial, or at least when I looked it was).  I never saw that before either, and it was really cool.  Afterward, as part of an informal cast party, I took Chrissie and a few friends midnight bowling at Recckios.

It’s been really mild lately except for cold wind.  Last week, the day after I went out in a t-shirt, it actually snowed, but was too warm to stay on the ground.  Merry is nervous, hoping for freezing weather for Thanksgiving so the kitchen doesn’t get too hot from cooking!