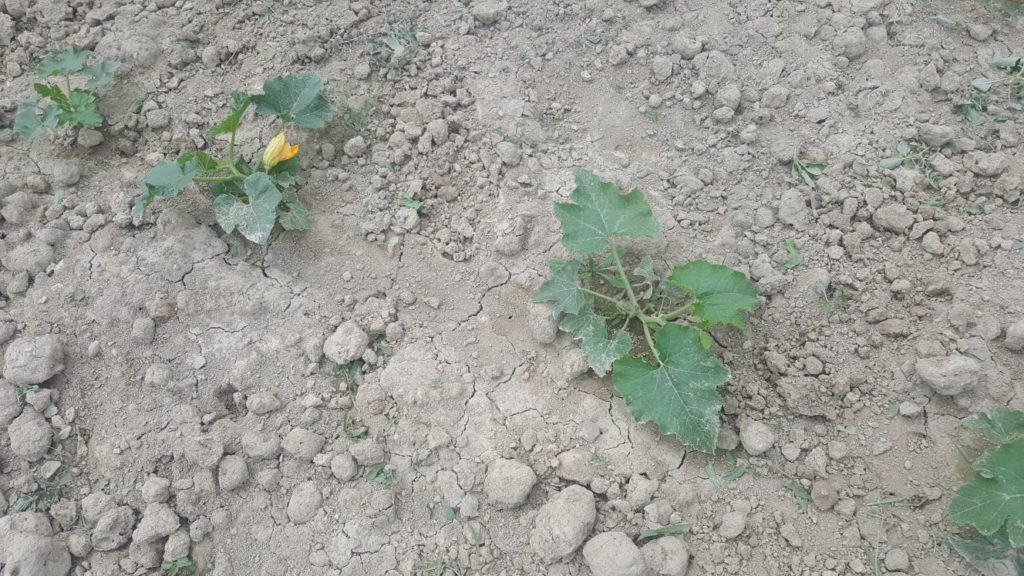 Merry wanted to be married in a pumpkin patch, but we just couldn’t pull it off. I wanted a traditional Christian priest, but the Roman Catholic Church doesn’t perform outdoor weddings without a dispensation. I called the Episcopal diocese, then Greek Orthodox (where I had friends), Russian orthodox, and possibly a few others, but their twofold answers were all the same: they didn’t perform weddings outside; I wasn’t a member of their church. We ended up getting married at my home parish, which was still fairy-tale.

But I decided I wanted to grow her a pumpkin patch. I thought about it ever since before our 18th anniversary. I planned for it and worked on it all this year. I bought the seeds from the High Mowing Organic Seed Company, who recently shared our story on Facebook, and had them delivered to the farm — four varieties of carving and pie pumpkins. Roughly five seedling trays and weeks later about 200 seedlings. The farm wasn’t sure where to make room for me, but they were on board with the whole idea and so I got a row and a third (200 feet long) at the edge of a little-used field. The curvature of the land was just right so that if you were at one end, you could truly say the patch went “as far as the eye could see”.

On her longer work days, or on the pretense they needed help at the farm, I spent hours here and there weeding, manuring, weeding, and more weeding. Christina helped me put on a tarp for the coming moments of frost, and I removed it on my way home from Binghamton. Let me backtrack a bit …

Our actual anniversary fell on advance night for our chapter of the Order of the Eastern Star. It was our first time ever sitting in the East as presiding officers. To make it special without taking over the event with personal matters, I arranged to have a couple decorators (also Star Sisters) come in and create a fall theme similar to our wedding reception. I also had a cake made and delivered similar to our wedding cake, but without columns and made out of cheesecake. (It was Merry’s first choice 20 years earlier but I don’t care for it, so the original cake was pound cake.)

The week before, we went to Grand Chapter in Binghamton, and as she (and our dog Hazel) got a ride back, I continued on to give a presentation on Astronomy at a Lodge in Poughkeepsie. I had to have the tarp on the whole time because the day before I returned the temperature was expected to be too low.

Anyway, I hadn’t planned the dinner decorations and cake until weeks before, as I fell into some money from projects. One of the points of doing the pumpkin patch was that it may not cost a fortune I didn’t have but represented something special in a big way. So that evening was a surprise, and there was no inkling for her there would be another.

Her cousin was coming in from Arizona the day after (Thursday) and my plan had been for the 21st (Saturday). On Facebook I back-channeled her to help me guide the itinerary to the intended conclusion, but Merry seemed dead set to arrange every other possible pastime for the time I arranged with family and friends. I had others be “busy” that time or found other reasons to move such things to other times, but it was getting tedious.

So I turned the tables. I had Deb (from the farm) invite her and I to a special farm picnic and tour, which of course her cousin wanted to do. So she insisted we go to the farm at that time instead of me prodding.

I had everyone park around one of the barns and they were waiting in the field. Our dear friend (and UU minister), Michelle, was to renew our vows, and my original best men, Jeff and Roman, were waiting on the other side of a barn to escort us to the field. At first she was shocked the two of them were there, but it took a little while to realize the people in the field were not a farm tour.

I will never forget that moment with the look on her face. It was as priceless and timeless as when my Bride walked down the aisle to me. And when she said it was the most sincere pumpkin patch in the world, I know I had achieved exactly what I had intended. 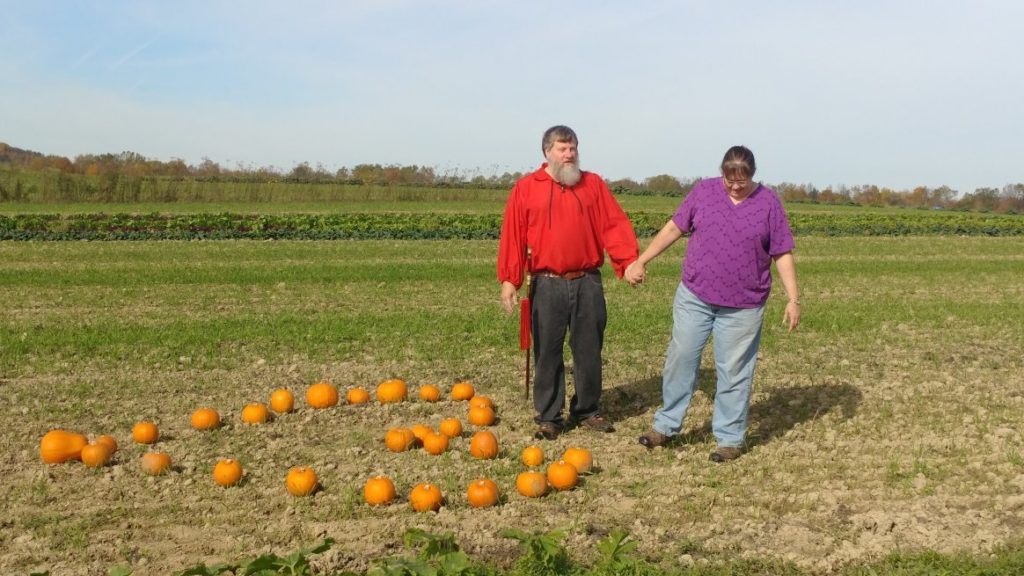 We all wandered and gathered pumpkins (and a second, larger harvest of them a week or so later). We had a wonderful reception at a Mexican restaurant in Springville. It seems like the beginning of a new life, not just Love reaffirmed, but an absolute certainty of Togetherness.

It was funny that to her it seemed like everyone in the universe knew about it but her, and she wasn’t mad about that. I would tell my Masonic Brothers, Lyft passengers, even people at the bank who later fawned over the photos they insist I bring them. Everyone says I set the bar sky high for such things, but I look at it differently. I just refuse to spend my life only talking about what other people have done, real of in fiction, or what would be a good idea. In things that are important, I won’t be a spectator. Merry means the World to me, so it’s not about what I wouldn’t do for her, but what I will do.