We’ve got a new parakeet to replace the one that died after a week just a couple of weeks ago.  Real friendly and doesn’t bite hard.  (Pardon the unintentional gesture.)

It’s been raining almost non-stop and we missed any window to go camping, which Merry and I are both itching to do.

In the meantime, I’ve been occupying myself with a board game I dreamt up at 5:30 in the morning a couple of weeks ago.  I call it “Total War” and we made a prototype from an old Trivial Pursuit we bought from AMVETS.  Merry’s Dad cut the tiles from wood pieces I got from Home Depot, and I wood-burned the markings and stained them myself.  Now it’s a matter of finishing the rulebook and having people test-trial it!

Then, the day before yesterday, I woke up early with another idea — headstones for tombs with stain-glass window decorations.  I drew a few and think it would really brighten up (reverently) graves.

I’m also starting to get orders outside the US and the UK for my Bush World Tour T-shirts.

Friday was Christina’s recital.  She was in a hula number in the first act, and was in the beginning and finale, as was everyone.  A ploy to keep parents captive, no doubt.  Halfway through the first act (after Chrissie’s number), I took a walk and did some Tai Chi in Delaware Park.  Beautiful, except for the incessant traffic noise near the lake.  I caught a lot of the second act when I returned.  There was some really good ballet this year, and a couple of nice solos, but like every year, there were one or more numbers that were like watching an unavoidable accident in slow motion — but faster and longer.  I actually didn’t take any pictures, which worked out okay since I couldn’t find Chrissie in the first or last numbers (she was way off the side behind the curtain in the last one).  I was a bit far away, anyway.

Yesterday, I returned to Seven Hills to teach Tai Chi (and Self-Defense this year) to the annual Girl Scout leader’s conference.  An intermittent warm rain made it seem like heaven.  It is one of the most beautiful places I’ve seen in God’s creation, and everyone welcomed me warmly as “Tai Chi Ken.”

We caught out tiniest cat, Lydia, on EBay today.  She was using the help menu when we shoed her off Merry’s new (used) laptop.  Usually she just types pages of consonants in MS Word, and she instant messaged Amy one time, but we need to find away to curb her privileges a bit before she starts using our credit cards! 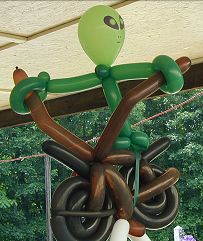 A couple of weeks ago, Merry and I went to the Strawberry Festival at Merritt Estates (Wine Cellars).  Jazz band, clowns making incredible balloon hats, chocolate covered strawberries, and even some free strawberry shortcake (a coupon off their site, which gave me the idea to take Merry).  The Rotweiler pictured on the site was there, and really liked sniffing Merry.  What a cutie!  And Merry even let me take a few pictures of her in a cute balloon hat of grapes and a big bee.

Afterward, we went to Dunkirk to check on the family graves, and grabbed some veggies and gas on the reservation on the way back home. 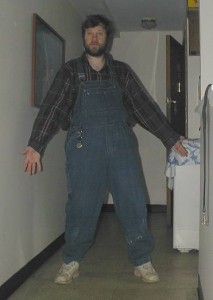 Last week, Merry gave me her bibbers that didn’t fit her (pant legs too short), and I can’t believe how great they feel.  I wear them all the time now (when I can get away with it)!

This came in handy when I went to work on a farm Thursday for the first time in my life.  It was cool, a little rainy, hard work at times, and lots of getting dirty.  Another first-timer said I looked as if I had done it all my life, and it sort of felt that way.  Sure, I didn’t know Spinach from Arugula, but nothing I did seemed foreign to me.  It was an hour drive each way to and from East Otto where the co-op Buffalo Organics‘ farm was, “Native Offerings”, and I brought home with me my a full share (“work share” in this case) of greens and spices.  Looks like a lot of salad this week!

Christina’s birthday is coming up, and we already celebrated a little when I took her to Media Play to buy any CD (appropriate, of course) that she wanted. She chose the pop compilation called “Now 12”.

I went to Michelle and her mom’s graduation party the Saturday before last — they both graduated from different colleges the same semester.  It was great getting back in touch with here finally.  I also got to actually talk at length with Lance, her soon-to-be fiancée.  I hadn’t been around Michelle much since I was her Confirmation sponsor (and teacher) years ago, so I wasn’t sure what to get.  When I handed her mom some flowers, and her a dozen green-tipped peach-ish roses in a vase and explained this, she enthusiastically said “THAT’S ALL RIGHT!” 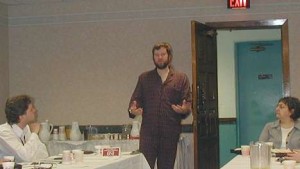 I went to my BNI meeting in pajamas Friday morning, as I was giving a presentation on my business.  It wasn’t laziness (primarily), but an illustration of how you would want customers to be able to build a relationship with your company at any time of day or night.  I got great reviews, and they loved the handouts, which I will have to put on the Kentropolis site. 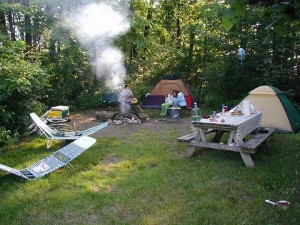 We spent the rest of the weekend at Evangola State Park with Christina and her old now-out-of-town friend Brianna.  We had a chiffon birthday cake for Christina, went swimming, and took an unexpectedly long guided trail hike.  When we got home, I took the stick I grabbed during the hike and made it into a walking stick for Merry — stripped, sanded, urethaned, looped, and wood-burned.  It took me little time at all, and Jeff said it looked like the quality of something you’d find in The Nature Company store.  Merry loves it, and it even matches the broom I bought her at the craft show at the Hamburg Fairgrounds a month or two ago.