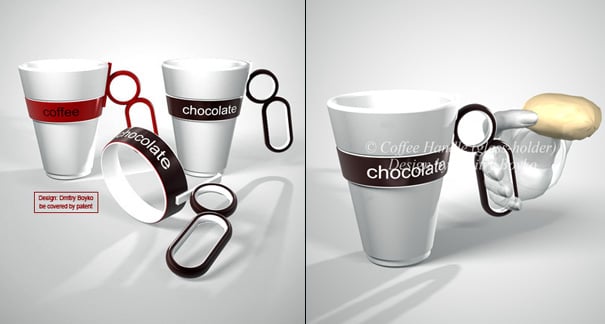 Ah, nothing so taken for granted in our society than mug handles. Unexamined. Unchallenged. Unergonomic.

They compress the fingers and are awkward on the wrist. Most long-standing functional objects have been perfected in times of yore. Well I don’t want your daddy’s mug. I want something that you can carry liquid lead around in without overburdening the top of your index finger or giving you carpal tunnel.

My point is the weight should be distributed between the fingers instead of all of them propping up the first. And the body doesn’t work in right angles in real life. Even traditional “anatomically correct” posture is bullsh!t in my opinion — one based on simple observation, simple activity, and teaching Tai Chi nearly half my life.

So what do I propose? Angling the handle slightly away from the cup and toward the body as it descends. No bottom support (since most mugs are too small for most people’s fingers or we have to decide how many to cram through he hole). A slight counterweight at the outer bottom for heavier ones.

Some small steps in the right direction are out there. One is what I call the trigger style, the particular sample below being an ingenious attempt at taming the coffee cup. However, it places all the weight on the top of four fingers and if anything the top loop stops one from it’s intended use of freeing the index finger to hold something. I can’t imagine repeat sales on this thing, as cool as the idea may have seemed at the time, and there’s probably a reason you don’t see an actual human hand contorting to that position.

The second is a squeeze grip. I really like this one, especially the inclusion of a stone, which gives it character and endless possibilities. At the store where it’s available, there is also one with a similar wood handle. 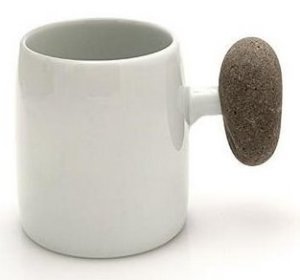 There are countless other designs, but none like what I propose. Now I just have to have a prototype made someday …