Now might not have been the best time to start a block club.  I already accepted the position of [[Tyler (Masonic)|Tyler]] at the Lodge, and although it does not involve duties beyond being a doorman at meetings, it further ensures I must be there at nearly all functions.  AND I now belong to the [[Order of the Eastern Star]] with my wife AND the WNY Lodge of Research.

Anyway, we held our first two organizational meetings and people insisted I act as president until elections.  There’s no telling where this will go, but I made it clear I am looking to longstanding residents to step up and fill the officer’s positions (including mine) when the time comes.  But it’s still a bunch of preliminary planning and work.  At least I got to make a cool logo (if I do say so myself), and we ended up using the name I first thought of when I moved here, “Indian Park”. 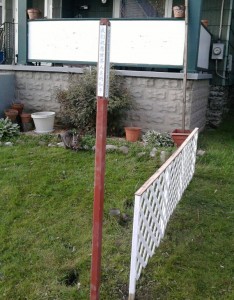 There has also been a lot to do with gardening.  I set up a third square raised bed for corn this year, along with fencing to keep Elmo out.  Strawberries finally occupy the caged planter I made, and we bought and planted the blueberry seedlings, along with fence and the [[Peace Pole]] I made last year.

Ans somehow we managed to snag a pond liner from Home Depot for a fraction of the usual cost, simply because it was discontinued and they had no idea what to charge.  Elmo is quite happy about it, and it brings us closer to more serious landscaping over the next year or two. 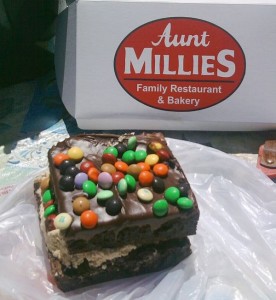 We also finally fixed up the graves last weekend, bringing Christina and her bed-frame home on the way back.  We stopped by a place called “Aunt Millie’s“, where the food was great and the deserts INSANE.  I bought something called a “brownie tower” that took four people to eat over the course of three days.  NOT kidding.

So let’s see … on top of that, reading lots of different books (making little headway), possibly starting a Tai Chi class at the VA Hospital for an extra day a week, and been busy helping my friend Bob in various ways with his new house.  At least I’m getting the exercise … if only it would show on the scale that would be nice.