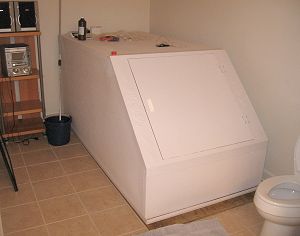 I can see how it would be relaxing, but did not find it more beneficial a circumstance in meditation than sitting upright or lying on a bed.  In fact, instead of decreasing external stimulus, for me it heightened my awareness of body.  My mind was neither more nor less calm or cluttered than usual, and if anything, I couldn’t get in the mood to “zone” (awake sleep state / lucid daydreaming) in such a strange environment.  Well, maybe a little near the end, but again, no more than if I had been dozing on the couch watching an uninteresting show on TV.

I thought it would feel more natural … I dunno … “womb-like” or something.  I like to float in a pool, and it was great doing it without effort, but after a while you could smell and even feel the salts in the humid air inside.  I would have killed for some fresh air and quieter blood flow.  The ringing was tuned out after a bit and I could voluntarily choose to hear or not hear my heartbeat — itÂ was more of a reverberating vibration than a sound in the usual sense.

In terms of posture, I was a bit uncomfortable laying on my back semi-weightless, and my neck and shoulders couldn’t relax, except when I placed my hands underneath me near the kidneys.

The whole experience was anti-climactic in the sense I was hoping for SOMETHING different than the obvious.  Not necessarily past life clarifications or out-of-body experiences, and maybe not a super-heightened self-perception or better method of stilling the mind, but one could hope … In agreement with the tank’s owner, I suspect people who’ve had “spiritual” experiences in the tank likely used such a contraption aided by pharmaceuticals.